The Apple vs Rim debate 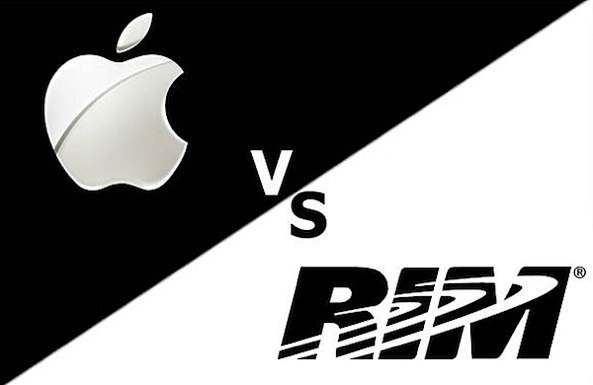 The Apple vs RIM debate has been running for many years amongst IT managers and it’s fair to say that historically BlackBerry has been device of choice for most IT departments. It has to be said that Apple’s recent offerings of the iPad and iPhone 4Gs have become popular business tools for users and are here to stay. In my view RIM has not come up with a suitable alternative for those users who prefer the touch screen.

The BlackBerry Storm did not flood the market as was expected and many users struggled to come to terms with the clickable touch screen and the early versions of the Storm seem to be sluggish and lacked basic features. The recent release of the BlackBerry PlayBook as an alternative to the iPad is looking better. I’m pleased to see they’ve dropped some of the annoying features like the clickable screen.

So why have IT managers generally been reluctant to adopt the iPhone and iPads? Well the reasons can be summed up in three categories, durability, security and central management, and we won’t mention price competiveness.

Apple has had trouble with their iPhones in particular, despite all the great features, excellent graphics and a host of available apps. Compared to the BlackBerry they have some weaknesses not least of which are the signal strength. I have to say that the iPhone has created a heap more work for our IT department compared to the relative low maintenance BlackBerries, a whole host of broken screens have had to be returned for repair (at cost), many problems with battery life compared to the BB 9700 Bold, and the problems with signal which has required us to make further investments in the Vodafone Sure Signal devices.

RIM have designed the BlackBerry with enterprise in mind and because of things like BBIM it became a popular consumer device unlike the iPhone which targeted the consumer market but quickly gained popularity in business. The result is that for many IT departments iPhones are not centrally managed or protected whereas the BlackBerry BES server gives a company the ability to apply a wide range of security policies. In some cases this is a bad thing for the over-zealous IT Department. I heard of one case of a bank finally switching over to BlackBerry and when the devices arrived their IT had blocked virtually everything including BBIM, BB Appworld, Bluetooth, Wifi, access to personal mail accounts, etc. one wonders why they chose the BlackBerry when they could have gone for a nice 1980’s Nokia.

Nowadays there are more and more tools available to centrally manage iPhones and other mobile devices but of course this usually means more investment in another 3rd party product. What many people also don’t know is that the BlackBerry can browse to internal intranet sites without the need to VPN in because the device is essentially seen as “inside the network” if you are using it with a BES Server. Encryption of messaging and email, password protection and many other security features are what IT managers put their faith in.

I can definitely see the iPhones appeal, its ease of use and mass adoption, mean it can’t be ignored and will always have a place in the business environment – especially with the vast range of apps already available, but the alternatives should be considered.