A new image of Jesus in our minds 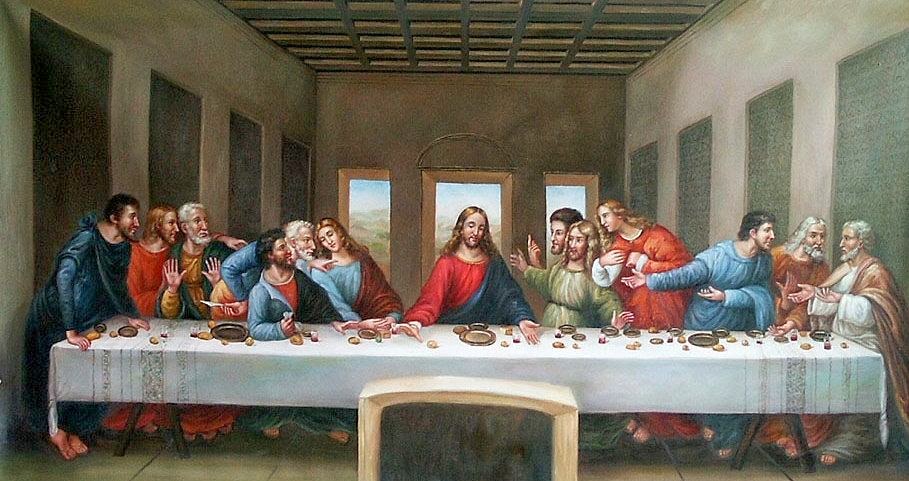 Maybe you think about Jesus with his disciples in the boat on the Sea of Galilee, or maybe you picture him at the Last Supper. Maybe you think of him in the garden of Gethsemane or basically you can think of any story of Jesus with his Disciples and I can pretty much guarantee that all of us see an image in our minds of Jesus surrounded by lots of men.

There is off course good reason why we all have the same images in our minds as soon as we think of Jesus’ and his Disciples. We are what you could say indoctrinated by our own Culture and 2000 years of a carefully orchestrated plan to portray Jesus in this certain way.

We have made some progress in rediscovering the original texts and the context of the culture at the time of Jesus, for instance most of us no longer picture a white blond hair blued eyed hunk like we may done even as recently as the 70s and 60s. We now know that Jesus of course was of Jewish decent, a Carpenter who spent many hours a day outside in the blazing heat of the Middle Eastern sun. It’s fairly obvious to assume that he had a dark olive skin complexion with dark hair and brown eyes and probably looked a bit rough and ready, no doubt his hands would have looked like they had done some hard labour and the occasional slip of the hammer may have left its marks. But believe it or not that new, more accurate picture of his appearance has taken a thousand years to be rediscovered in the west.

Actually, it does not go nearly far enough in recognising that Jesus was a radical, a rebel who was despised by the entire establishment and the ruling and religious classes for the simple reason that everything he did went against the grain! He broke every cultural and socially acceptable rule. For instance look at the story of the woman at the Well. With only a little study we quickly discover that by even just talking to the Samaritan woman Jesus broke every rule going, The history between the Jews and the Samaritans, who were classed as mixed race Jews, goes back a 1000 years to the time of King David. When the Kingdom was split in two and the ten northern tribes separated from the two southern tribes that remained loyal to David. Not only was it strictly forbidden to mix with a Samaritan from the Jewish side the Samaritans who claimed to be the true blood original tribe of Israel also forbade anyone to mix with the Jews. Jesus here broke two laws; talking to a Samaritan and speaking in public to a woman.

The Culture at the time of Jesus was that men were called by God. Women had no prominent place in Gods kingdom or in society, so much so that the identity of a woman was based on the name of her husband or father, and even in some cases the woman would be known by the identity of her son. So when we read the story of the feeding of the 5000 we know that woman and children were not even counted, literally as if they were never there, as if they did not exist,!! It’s no surprise therefore then that the new Testament Gospels talk mostly about 12 male disciples. This image has continued to be portrayed throughout history, of Jesus and his 12 Disciples. In fact history shows us that there have been consistent and deliberate attempts to etch from the history books the women involved in the stories in the Gospels.

Let me ask you this, if you’re a churchgoer, when is the last time you heard a sermon about the important roles that women had in the New Testament? In fact when is the last time you heard any sermon about women in the NT, I bet you I can name them. You probably remember a sermon about Mary and Martha, and the main teaching point was probably about pointing the finger at Martha for being busy instead of sitting at the feet of Jesus listening, where she belonged? You probably heard a sermon once about the woman who was healed by touching the cloak Jesus was wearing. Maybe a sermon about Mary Magdalene who is normally portrayed  as a prostitute, despite there being no evidence of this.

The truth is that Jesus was the only rabbi at that time that had female followers and even female disciples, Women were not even supposed to be educated let alone be allowed to follow a rabbi as Jesus was. We now know that Jesus’ had many female disciples and these women were not just “hangers on” but these were strong independent women, some of whom were very wealthy and these women pretty much ran the show! Women financed this 1st century Jesus movement from their own means and it was Women who provided for the mission and ministry of Jesus and without a doubt were treated as absolute equals to the male disciples, no wonder Jesus was so popular amongst women and no wonder He was so hated by the establishment

“There were also some women in their company who had been healed of various evil afflictions and illnesses: Mary, the one called Magdalene, from whom seven demons had gone out; Joanna, wife of Chuza, Herod’s manager; and Susanna—along with many others who used their considerable means to provide for the company.”

These very capable women clearly where part of the inner crowd and remained close to Jesus throughout his time. They were also the ones who remained at the cross till the bitter end and they were the ones who Jesus revealed himself to after his resurrection.

Could it be that in Mark 6:7 where it says Jesus sent out the 12 disciples in pairs ( two by two) or “duo duo”, that this was understood like it was actually in the time of Noah two by two male and female? It is quite conceivable with so many women joining the Jesus movement that there needed to be women around, who had also been anointed along with the twelve, to lay hands and baptise these women, it would have been totally unacceptable for Men to baptise women or lay hands on them to pray for healing.

One thing is for sure Jesus mission and his closest allies involved a number of prominent women, who were present in every story, every step of the way. Its time therefore that we redraw the images  in our minds of Jesus and his disciples, From now on when you picture the last supper or the boat trip across the sea picture Jesus surrounded by 12 men and lots of women.

Picture these women with Jesus not as humble subjugated servants but as strong independent women who were instrumental in financing and providing practical support for the Jesus Movement -1st-Century-style. And remember these pictures and the roles women play today in our churches, and watch yourself that you don’t subconsciously fall in the trap of thinking men should play the prominent roles.